A Brief History of H&B RFC 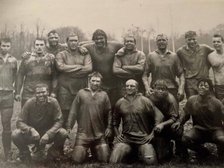 A Brief History of H&B RFC

The Hastings and St Leonards Observer of 17th November 1883 featured the following report:

“A match was played between these teams on Saturday last, in the central Cricket Ground which ended in a draw, some dispute taking place between the captains of the clubs upon a try which a member of the home team secured for the borough club.”

Research has shown that the players were masters from the local private and preparatory schools who had played the game whilst at their universities. The report was the first reported game of adult rugby in the area although the fixtures between local schools were regularly reported prior to this.

It is difficult to say who the local rugby heroes were at this time because in most case all that was reported was a brief narrative, the final score and the team members. Individual s were not named in the reports.

In November of the same year as the report (1883) the Sussex RFU was formed. Their first fixture was played at Worthing against Hampshire and the Sussex team contained players from the Hastings, Brighton and Worthing Clubs. The visitors won by one goal and three tries to one try (disputed).

Hastings has therefore been a centre of Rugby Football since the earliest years of Rugby in the county. There were several clubs playing in the area until the 1st World War called a halt to fixtures in 1914.

After the war no mention is made of rugby in the area until on 24th April 1924 a group of players met at the Yelton Hotel on the seafront and the club was formed. Their first fixtures were played as Hastings and St Leonards RFC and they played at The Horntye Field, Bohemia, now the new cricket ground, and at a field on The Ridge owned by the Eldridge family. Ironically it was this same family who in 1997/8 hired us a pitch when our pitches at William Parker Sports College were unavailable because of the renovation work. In 1926 the Mayor of Bexhill allowed the club to play at the Polegrove and in recognition of this the club’s name was changed to Hastings and Bexhill RFC.

The first Chairman of the club was F.W. Coles. He became President of Sussex RFU for the season l932/33.

G.H. Minton who was Captain of the club for their first game at The Polegrove went on to become Sussex President in 1947 a position he held until 1950.

The club have regularly supplied players to the County XV:

M. Seward was also awarded 6 caps for the County but this was for Hastings RFC a club from before the 1st World War.

The Redman Cup, presented by the family of the late Pat Redman (President 1978/80) is awarded to members who play in County Games.

The Peter Southee Rose Bowl is awarded to women players who play in full County games.

Hastings & Bexhill have also supplied in excess of 20 Colts and Junior players for various County XVs.

Over the years Hastings & Bexhill RFC has had many outstanding players. Two from the 1950s deserve inclusion in this history. Bill Young played for the Club at the end of a very distinguished sporting career. He won six caps playing for Scotland either side of the 2nd World War and in 1948 scored the try at Twickenham that won Scotland the Calcutta Cup that year.

Ian Beer played for the club whilst on holiday from Cambridge during the seasons 1952/54. He played for Cambridge University and Harlequins and was capped for England. In 1993/4 he was President of the Rugby Football Union.

Whilst the club was playing its games at the Polegrove it had no Clubhouse until 1969 when one was opened in partnership with Bexhill Cricket Club. Prior to that, visiting teams were entertained at the Green Lawn Tennis and West St Leonards Bowls Club in Tower Road West – a long journey from the Polegrove!

In 1996 the club moved to its present home at William Parker Sports College. Since then much has been done to improve the playing surfaces by levelling the pitches and installing drainage. In 2009 the club has done further work to improve the quality of the playing surface. By self funding £22K and receiving a grant from the RFU of £14.3K we have been able to double the amount of drainage, drains installed every 5 metres rather than the existing 10 metres, as well “sand banding”.

This work has already been of huge benefit as in previous seasons after the amount of rain we have had both pitches would have been unplayable. To date no matches have had to be postponed due to waterlogged pitches!

The club has also invested in a great deal of training equipment such as floodlights, essential for winter training, tackle bags and a Predator Scrummage machine.

The playing strength of the club has grown in numbers since the 1920’s when only one team was fielded. The A team (2nd XV) were first playing regularly in the 1932/3 season. Today we have three senior teams, an occasional Veterans side, a Women’s XV, Minis from Under 7 through to U12, Juniors from Under 13 to Under 16 and a Colts XV.

Since their formation in 1975/76 many of our senior players, at all levels, have come from through the ranks of the Mini, Junior and Colts teams.

This season (2014/15) we have started a Girls Squad and have a number of U15s and U18s. If any Women or Girls would like to train and play for the club please contact us.

Hastings and Bexhill have a fine tradition for touring. They were the second team to visit Ceylon, modern day Sri Lanka, following after the great London Welsh team of the early 1970s. We regularly held weekend tours to France, Belgium, and Holland and the UK. There were also longer tours to Yugoslavia and the USA.
The traditional Easter Festival, where we hosted teams from as far apart as San Francisco, Texas, Sweden, Yugoslavia, Europe and all over the UK has in recent years suffered because of league commitments.

League rugby came to Hastings and Bexhill during the 1980/1 season in the form of the Official Merit Table. We were founding members of the Courage League in 1988. In the 1989/90 season under the leadership of Steve Pepper we were undefeated champions of Sussex Division 2 and again in the following season the undefeated champions of Sussex Division 1. Unfortunately this form did not continue into London Division 3 and we were relegated the following season. We remained dominant in Sussex Division 1, reaching promotion play-offs and winning the Sussex Vase twice, under the captaincy of Paul Sandeman and Neil Redman, until in 2006/07 Kit Claughton led the team to a second Sussex One title. In the process H&B registered one of the biggest points differences in all the RFU leagues, scoring over 450 points more than they conceded, and once again heading up to the London Leagues. However, after a tight league season and results going against them in the last match of the season H&B were relegated, after 3 seasons in the London league, to Sussex 1 in 2010.

In 2011 Hastings & Bexhill RFC switched to the Kent League (Kent 1). The club felt that playing in this league would provide them with regular tough games and it would better prepare them for life in a London League. After a fourth, third and then second place finish, where they beat Crawley in a play off, they returned to London SE 3.

Hastings & Bexhill RFC, in common, with most junior rugby clubs, cannot function with a lot of hard work from its members whether this is on or off the playing field. The Club has a number of ways in which it recognises these efforts. For exceptional service to the Club over many years an Honorary Life Membership may be awarded. This is a rare honour and currently there are only eleven Honorary Life Members. For work and dedication over a number of years a Vice Presidency may be awarded. This honour is only offered to current club members.

Outstanding players are recognised each year by the award of an Honours Badge.

Details of all the awards in the history can be viewed by visiting our Honours Board.