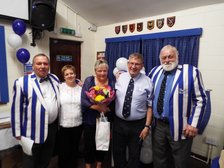 Hastings and Bexhill RFC held their annual awards evening on Saturday. After a delicious meal made in the club kitchen; the evening proceeded with presentations to players and other members who have contributed to the running of the club during a very successful season.

Second fifteen skipper Tom Jones presented trophies to three players who have excelled during the season. Tom Hirst was Captain's Player, his brother Will was voted Player's Player and Max Mowbray was Captain's Hero.

One of the most improved players this season has been Joe Whitehill - James; he was selected by the coach Steve McManus in recognition of this progress for his Special Award.

President Roy Wake made presentations to committee members and players who have served the club, as volunteers in every section.

The Redman Cup was awarded to four junior members who were selected by Sussex; Jack Whyte, Rhys Ellsworthy, Ellis Ridgeway and Hudson Wales. Sebastion Cameron-Clark was also honoured for his selection by Surrey.

Robert Sewell and John Naylor were made Honorary Life Members in recognition of their work for many years on the club committee.

The last presentation of the evening was made by the whole club membership to Chairman and Secretary; Jerry and Sue Hohenkerk who after many years working in every part of the club are retiring from active service. They were presented with a Warners Holiday Voucher, a bouquet and a large bag of goodies including an On Line shopping Voucher